There’s a feeding frenzy happening in the snack aisle.

For both food behemoths, the acquisitions offer opportunities to gain a deeper hold on the $27.7 billion (and growing) salty snack market.

In recent years, Hershey has gobbled up the likes of Brookside Foods, KRAVE Jerky and barkTHINS chocolate, but the Amplify acquisition marks the company’s largest land-grab to-date, and Buck called it the first acquisition “of scale” in the savory snack category. Hershey is paying $12 per share for Amplify; including net debt and a $76 million make-whole payment, the transaction is valued at $1.6 billion. The confectionery giant is projecting $20 million in annual run-rate synergies over the next two years due to cost-savings and portfolio optimization.

In a sit-down interview with Forbes in November, Buck talked about the importance of growing Hershey into a broader “snacking” powerhouse by way of external acquisitions as well as internal development (which has resulted in products like the new Hershey's Gold bar), and discussed to the rationale that underlies the Amplify deal. ”I’d say we have a lot of opportunities in better for you and savory,” she said at the time. “We’re always looking for, I’d say, the Millennial generation and what else can we buy that appeals to a lot of those consumers.” 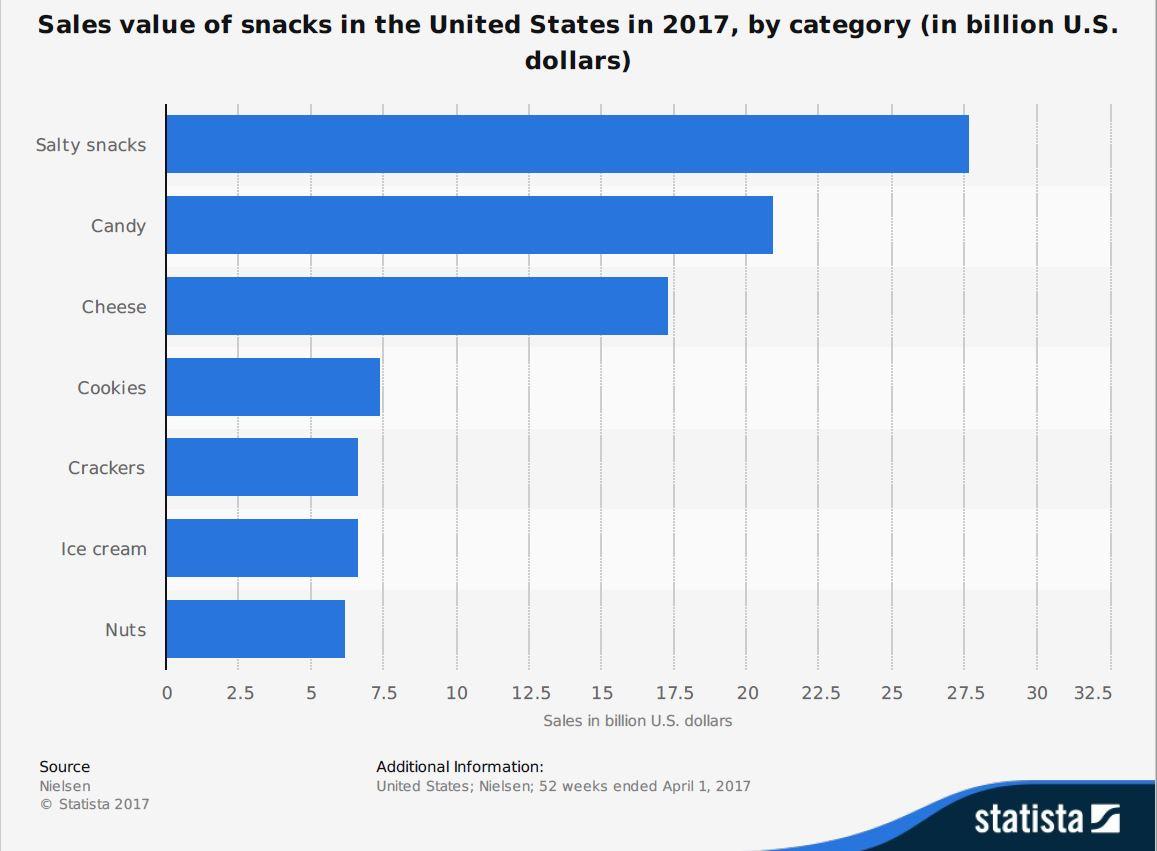 These numbers also go a long way to explain Campbell Soup’s own Monday merger announcement, a $50-per-share, all-cash deal for Snyder’s-Lance, an entity that recorded $2.2 billion in trailing-twelve month sales (as of September 30) for a suite of goods that includes Snyder’s of Hanover, KETTLE chips, Cape Cod, Pop Secret and more.

“The combination of Snyder’s-Lance brands with Pepperidge Farm, Arnott’s and Kelsen will create a diversified snacking leader, drive sales growth and create value for shareholders,” Denise Morrison, Campbell’s CEO, said in a statement Monday morning. “This acquisition will dramatically transform Campbell, shifting our center of gravity and further diversifying our portfolio into the faster-growing snacking category.”

Campbell’s said that its existing baked snacks product portfolio generated approximately $2.5 billion in net sales in fiscal 2017; adding Snyder’s-Lance to the mix would represent about 46% of Campbell’s annual net sales on a pro forma basis.

Under Morrison’s guidance, Campbell’s has, like Hershey, pursued a number of acquisitions in recent years. Notably, the company acquired Bolthouse Farms (which sells fresh carrots and juice) in 2012 and Plum Organics in 2013.

“Despite its recent tie-ups, we doubt that Campbell’s thirst for deals has been quenched and expect it will apportion excess free cash flow (which averages in the low double digits as a percentage of sales annually) to make acquisitions,” Erin Lash, Morningstar analyst, wrote (presciently) in a note last week.

And if the salty and “better-for-you” snack categories continue their dominance over the rest of the market, Campbell’s — and Hershey, for that matter — won’t be the only legacy food company with an insatiable appetite for smaller snack brands. In other words? The feeding frenzy has only just begun.

This article was written by Maggie McGrath from Forbes and was legally licensed through the NewsCred publisher network. Please direct all licensing questions to legal@newscred.com.