Fire, Floods, Hurricanes: How and Why Corporations Must Help

Hershey POV: This article for the Social Impact pillar demonstrates precisely how one company committed to corporate social responsibility is making it successful. The delicate balance between effective disaster aid and corporate self-promotion is insightfully explored. Many examples show how companies are providing disaster relief that makes sense for their communities, their employees, and their brand. 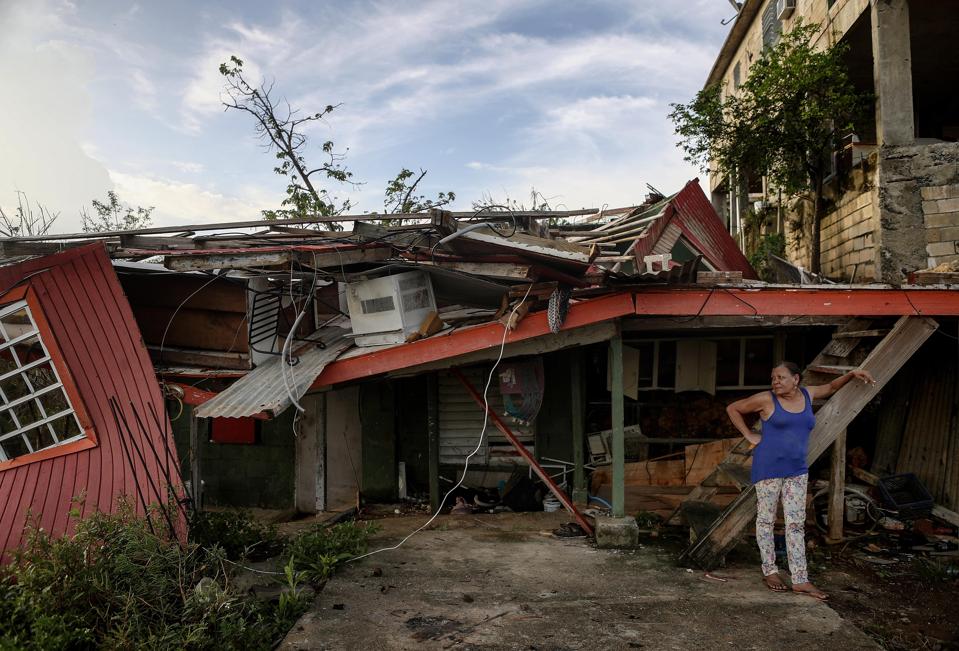 Gladys Francisco stands in front of her destroyed home in San Isidro, Puerto Rico on October 17, 2017, after U.S. soldiers unloaded food and water, provided by FEMA, to residents in the neighborhood still without grid electricity or running water. (Mario Tama/Getty Images)

Corporate social responsibility is part of virtually every corporation’s mission statement today. But as Thomas Malnight, professor of strategy and general management at the International Institute for Management Development, in Lausanne, Switzerland, and coauthors write in a McKinsey & Co article, translating good words into good deeds is often a challenge:

As customers, employees, and suppliers—and, indeed, society more broadly—place increasing importance on CSR, some leaders have started to look at it as a creative opportunity to fundamentally strengthen their businesses while contributing to society at the same time. They view CSR as central to their overall strategies, helping them to creatively address key business issues. The big challenge for executives is how to develop an approach that can truly deliver on these lofty ambitions—and, as of yet, few have found the way.

With the recent avalanche of natural disasters hitting the United States, including the wildfires in northern California, and hurricanes and flooding in Texas, Florida and Puerto Rico, corporations are called upon to help those who are suffering, often including their own employees living in the areas affected.

To understand how companies react to such natural disasters, and what specific companies are doing right or wrong in such situations, I reached out to public relations guru Paul Holmes, founder of The Holmes Group located in New York and London and chair of The Holmes Report. In his role as PR leader with over 25 years’ experience advising companies, Holmes has a valued perspective on companies’ responsibilities in the current natural-disaster crises.

“In the past, many corporate social responsibility programs have been of the ‘feel-good’ variety, generally a token gesture of cash or other support. But I think the public is getting better at recognizing ‘inauthentic’ CSR,” he warns.

And while we think of CSR as a new trend, it’s been going on for years for some companies, like medical supplier Johnson & Johnson. Its CSR roots go back over a century when it stepped in to provide disaster relief following the 1900 Great Galveston Hurricane that claimed 8,000 to 12,000 lives, making it the nation’s deadliest natural disaster.

At the time company founder Robert Wood Johnson felt the company had a responsibility to make sure its life-saving products would be available in times of great need. Since then, it continues to work with government agencies and independent relief organizations, such as Save the Children, Americares and Heart to Heart International to donate supplies and financial aid where needed.

Here is some of Holmes’ advice to make corporate social responsibility programs meaningful for the company and effective for the recipients:

Be real, be ready

Authentic CSR means the company must spread social responsibility throughout the organization and how it interacts with all, including its employees, customers, suppliers and partners. “Consumers—and employees—are dismissive of short-term initiatives. They expect companies to be responsible in a sustained way, ideally at a cultural level rather than through a one-off program.”

So while the recent spate of natural disasters calls on companies for such one-off actions, companies need to be ever ready to act with systems in place when response is needed. For example, American Logistics Aid Network (ALAN) is a humanitarian relief organization that was founded after Hurricane Katrina by several professional and trade associations. It acts as a clearinghouse to get supplies, goods and services where they are needed. Corporations that are part of the ALAN network are able to match specific needs with their capabilities and partner with other network suppliers to best move those supplies in and get them distributed.

Not “giving back,” but “giving a hand”

One thing that rankles Holmes in the CSR world is the use of the term “giving back” as synonymous with it. “This idea of CSR as ‘giving back’ is a notion that implies the company has taken something from the world that needs to be returned,” he says. “The first thing a truly responsible company does is make sure it’s not taking anything—from the environment, or from the communities where it operates—in the first place.”

Rather than “giving back” companies should think of it as “giving a hand,” which is exactly what insurance company Allstate, the “Good Hands” company, is doing. It has pledged $3 million in Hurricane Harvey and Irma relief, but it also is launching a Goods Hands Education Center in Houston and Florida offering workshops where it can share its expertise in rebuilding homes with those affected whether they are Allstate customers or not.

Stick to the company’s knitting

As in the examples of J&J’s delivering medical supplies and Allstate’s providing its experience in helping people rebuild their homes, Holmes says the most effective CSR programs deliver on a corporation’s core competencies. “The best CSR efforts in disaster relief tend to draw on an organization’s strengths—the logistical expertise of FedEx, or the products of a bottled-water company—and its existing relationships.”

So Butterball, the turkey company, is making sure Thanksgiving comes early for survivors of the hurricanes and fires. It’s supplying 40,000 pounds of canned turkeys through the Red Cross and to local food banks. It also provides turkeys to feed residents and emergency personnel through Operation BBQ Relief, an organization started in 2011 that stands ready to go into action when disasters strike. With its numerous corporate sponsors, like Butterball and other food and barbecue-grilling suppliers, its meals are prepared by volunteer professional chefs and served by volunteers. Butterball Master Chef Tony Seta gives advice on proper turkey-grilling techniques and recipes.

In a similar vein, Red Wing Shoe is donating work boots and coveralls suitable for the cleanup efforts, as well as socks and footwear meant for victims directly affected, with Good360, its partner to distribute the goods where needed.

Involving a company’s own customers in its CSR efforts is also a powerful idea. After all, a company’s customers are part of its extended family. Numerous businesses are collecting donations at this time of need from their customers, like restaurateurs Firehouse Subs and Panda Express, with those funds combined with corporate donations to contribute to relief efforts. 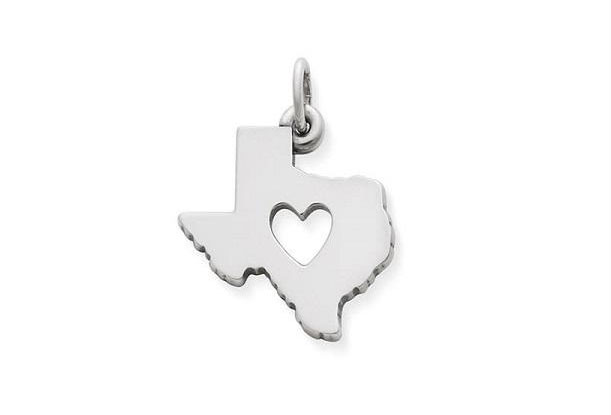 Or customers can be involved even more personally. James Avery, the Texas-based jewelry company, turned its “Heart of Texas” charm into a giving opportunity. Immediately after Hurricane Harvey hit, it decided to collect all sales of its $40 charm and donate the proceeds to its Houston neighbors with the added benefit that its customers get to wear a memento of their contribution on their wrists. It sold 15,000 charms in the first 12 hours and by the end of September, it had collected more than $1.8 million in charm sales to donate to the cause.

In CSR programs and disaster relief, Holmes also stresses the need to be mindful of the corporation’s own – its employees. “It is important to communicate these initiatives internally. First, because employees in affected areas need to know that the company has programs designed to help them weather, both metaphorically and literally, the storm,” he says. “But second, because employees in unaffected regions need to know that the company is helping their friends and colleagues, and also because it sends an important message internally about culture and values.”

In addition to its monetary contributions to relief aid, Panda Express is stepping up to help its employees in ravaged Puerto Rico. It is supplying its associates with cell phones and first aid supplies, plus delivering generators to those with young children and elderly parents with medical needs.

J&J is involving its employees too in a J&J Home Share Program, a grassroots idea originated at the local level by a staff member with an extra room to share. Headquarters marshaled the needed corporate resources to create virtually overnight a matchmaking service where available rooms could be matched with J&J colleagues displaced by the storms. More than 220 employees and retirees came to the rescue with rooms and beds for those affected.

And finally, Holmes stresses the corporation must keep in mind that its CSR programs are aimed at the community at large, not the corporation. “I believe that companies should be relatively circumspect in terms of seeking credit for disaster relief efforts from customers and the general public.”

The worst thing, Holmes warns, is for the company to “become the story,” by either seeking credit or by being accused of indifference. He goes on to share how some companies were criticized on social media for inaction after the devastating 2008 earthquake in China. “When some of those criticized took steps to explain what they were doing, they were criticized again for boasting about their efforts. It can seem like a no-win situation.”

One solution he offers “is to discuss efforts in the context of an appeal to employees, customers, etc., to join in: ‘we are airlifting water to the disaster zone, if you’d like to help, here’s how …’ Using social media for something like this seems appropriate; putting out a press release less so.”

And on a final note, Holmes cautions that authenticity and consistency are critical to keeping the mission of CSR actionable and effective, both for the company’s goals and the recipients of its efforts. “Let me be clear, in times of crises companies must do whatever they can, in the most effective way possible. But companies need to be consistent across any and all markets where they operate. Don’t be generous in Houston and stingy in Puerto Rico. Don’t make a big effort to help victims in the U.S. but ignore a similar incident in India—assuming you have operations in both markets. Any inconsistency will be seen as evidence of a double-standard, and motivations will be questioned.”

This article was written by Pamela N. Danziger from Forbes and was legally licensed through the NewsCred publisher network. Please direct all licensing questions to legal@newscred.com.